My First Attempt at Homemade Bread

Well I did it. Baking bread was my January Kitchen goal, and I didn’t actually get to it until the 3rd of February, but I did it. I was prompted to do so since I forgot to pick up bread when the girls and I were out yesterday afternoon and I wasn’t going to be able to go back out before the snow hit. So I thought it was the perfect motivation to just bite the bullet and do it.

For all of you that think that I am a wiz in the kitchen, I want you to know that most of what I am great at now was through trial and error, and my first round of bread was no different. My second round was as well for that matter.

Here is a picture of my first attempt: 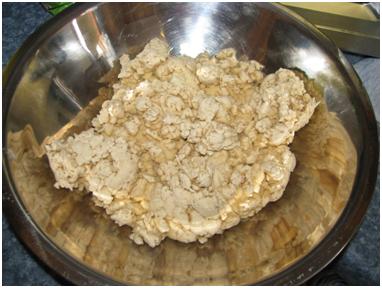 The first time I combined recipes/methods. What happened was I wanted to use my mom’s kitchenaid with its dough hook. The recipe I was using gave directions to do it by hand so I looked online to find directions to convert a recipe to a kitchenaid.

The second problem was that I didn’t read the original directions very well (big mistake that I totally know better than to do). The recipe called for the milk, butter and whatever else to be warmed on the stove top. The kitchenaid directions I was following said to add all the wet ingredients directly into the bowl. So basically the yeast was never activated.

The second attempt I went online and found a full recipe that used a kitchenaid. You can find the recipe here. I liked this one much better even though it didn’t turn out quite right either, but I’ll get to that in a minute. It called for very warm water instead of milk and it called for olive oil instead of butter. It also had honey in it unlike the previous recipe.

At this point Emma woke up from her nap and wanted to help and I was in a time crunch to try and get this done before dinner so we could have it with our soup. I started in again with the help of my pint sized assistant and everything went as smoothly as it can with a three year old. I set it next to the stove covered with a towel so that the warmth from the cooking soup would help it rise.

I checked back an hour later and lo and behold it hadn’t raised an inch. Really, REALLY! At this point I knew it wasn’t going to be done by dinner. I didn’t even know if it would rise at all. But hubby was home and he really wanted biscuit with the soup so I set out to get them started even though I was tired and despondent.

I went about getting things out and was about to start everything when I read “cut in butter”. Oh ya, that’s right, the butter is supposed to be cold and I just melted it in the microwave. And look the only butter I have left in the frig is the pound I just took out of the deep freezer.

Yes, I went in to the living room, sank into the chair, declared there would be no biscuits tonight and began sobbing.

We ate dinner without bread or biscuits.

After dinner I decided to make a last ditch effort to resurrect the bread. I stuck it in the oven with a bowl full of very warm water below it and left it for an hour. Much to my great delight it had started to rise when I returned to check it! I let it go a little longer and then worked it down a little and put it into the pans to rise again. At this point it was 10:45 so Joel headed to bed and I stayed up to let it rise and bake it. Well after 45min it still hadn’t risen so I said forget it, left them in the oven with fresh water and headed to bed.

This morning they had risen, not as much as I would have liked, but it didn’t help that my girls ran around and the bread fell a little. We baked them up and they tasted delicious!

Here are the results: 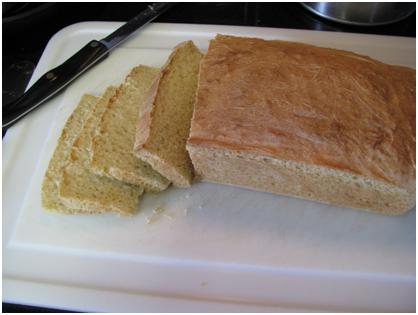 I realized through the process of the second batch of bread that I didn’t have “quick rising” or “bread” yeast like I thought I did which was why it took so long for it to rise. However we (the bread makers in the house aka my grandma, my dad and myself) think that it was either old or a bad batch of yeast because it didn’t rise nearly as much as it should have.

Was it worth it?

Yes. I will be doing it again and in the near future will be trying whole wheat bread, but I didn’t have any on hand and I’ve been trying to use up some of the abundance of all purpose flour I got on sale during the holidays. I haven’t figured out the price comparison but I like being able to make bread whenever we need it. I also like knowing exactly what is in it. As far as how easy it was, well, I was a little rushed so I am looking forward to trying it again earlier in the day without time constraints and with the right yeast.

Over all it was a positive outcome and wasn’t nearly as scary as I had imagined in my head for all these years.

Thanks for sticking with me. I know this was a long post, but I wanted to encourage you that everybody has disasters in the kitchen and you are not alone!

I am linking this to:

Hi Libby! I always check in on your blog posts. Sorry to be one of those opinionated give advice over the internet types BUT if you are going to start baking bread- you need a bread maker. I love that most homemade bread recipes are just dump and press start… Sometimes when I am ambitious I dump, put it on the dough setting and then reshape it and let it rise and cook it. So easy. Also, I bought one on craigslist for $15. Good job on your first attempt though. It looks like bread to me. 🙂

Jenny-not a bad idea. My parents had a bread machine before we moved out. They inherited it from my aunt after she died, but they never used it. A mouse ended up chewing through they cord so they had to pitch it.
I can’t say that I will never use a bread machine, but the kitchenaid really does a splended job and I don’t know if I want another machine taking up counter space that only does one thing. I may change my mind once I get to making bread on a regular basis though. We shall see.
Thanks for stopping by and commenting. You are certianly not opinionated!

My mom has a pretty easy recipe for white bread that we use to make loaves, rolls, bread bowls,etc. The recipe is for a huge batch but it is easy and always works. Let me know if you want it-it is by hand/scratch. Also, I have the recipe for the hamburger buns/rolls if you want it. Keep making it from scratch, it is worth it. I have a bread machine I use but I still like to make it by hand. 🙂

Renita- Yes I would love both recipes. Bulk is better and I can always freeze the bread. I am definately going to keep makeing bread. It was so delicious. I will probably go back and forth for a bit until I figure out how much I need to make at a time.

I had the same issues when I started making our bread from scratch. My great grandparents were bakers by trade and I felt so inadequate! Practice makes perfect, though. When I have a loaf that doesn’t turn out the way I was expecting, I just make a big batch of french toast! Here’s a link to a recipe I posted today that makes a great loaf. Hope you like it.
http://stayathomefarmermom.blogspot.com/2012/02/honey-oatmeal-bread.html
Hang in there. Before you know it, you will be turning out gorgeous loaves in no time.

Tracy-Thanks for the encouragement! My aunt baked all of her bread for her 6 kids and I was always in awe. I want my kids to grow up with memories of the smell and taste of fresh baked bread!