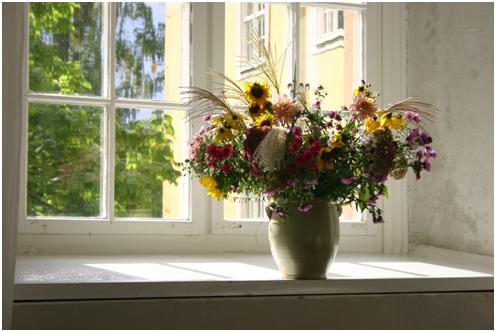 Emma has the most beautiful long golden hair. I love, love, love when she is in a hospitable mood and allows me to brush it. I envy her hair, not so much the blond part, but the silky, long part. I have only taken scissors to her hair once and that was to cut a small wisp of hair off when her ear drum burst and caked into it. Otherwise I would never have considered taking scissors to her hair….until Tuesday night, or should I say Wednesday morning.

Emma came in saying she didn’t feel well so I let her crawl into bed with us. Not too long later she stirred and started gagging. I got her out of bed in time and averted that mess. She woke up several more times but they were all false alarms. Then she woke up again and I wasn’t fast enough. Fortunately we had laid a towel under her after the first time and that caught everything, but there was splatter all over Joel’s pillow case, our nice.white.brand new. First night sleeping in them sheets, grr!

During the whole episode quite a bit of “it” got in her hair. Joel carried her in the towel into the bathroom and I began the gross, disgusting, torturous task of cleaning her up. I will admit, as I was trying not to gag, I consider giving Emma her first hair cut. Instead, I went into the bedroom and took a few deep breaths to strengthen my nerves and my stomach and went in to clean her up.

That was by far the grossest thing I have ever done. It was even worse than the time she was around a year old and had thrown up in her sleep and slept in it all night. And since she had eaten carrots the night before I came into her room to a smiling little girl whose head and face were glowing orange. She was sooo happy to see me though!

So, have you ever considered extreme measures when faced with a very gross mess?