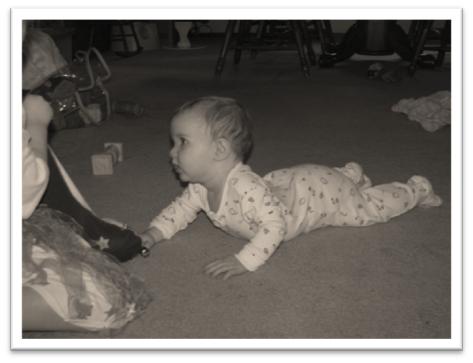 I think it’s safe to say, now that we are on our third girl, that we have far fewer surprises when it comes to parenting small children. I know as they get older we will have to cross those big (sometimes scary) bridges like breasts, periods, and the reproductive process of humans (and other creatures), but I have also found that each child doesn’t want to be left out. They want to leave their own graffiti on the wall of our parenting story board, Lucy included.

**This is a GROSS ALERT! Don’t eat while you are reading this. You have been warned**

We thought that Emma had pretty much broken us in when it came to gross situations. There was the time she had eaten pureed carrots for dinner, thrown up in the middle of the night, and went back to sleep without a peep. When I went in the next morning to get my sweet little blonde baby, she was holding onto the rail while bouncing, beaming from ear to ear, and had bright orange carrot caked in her hair among other places. Did I mention I was pregnant with baby #2 at the time? Joel had already left for work so it was just me and the babe.

Then there was the time that her diaper came off when she was sleeping in the pack and play at my parents. My poor (childless, first time uncle on our side) brother, excited to wake up his niece, went up and was horrified to find her in her own poo. It was in her finger, it was everywhere. I don’t think he was ever the same after that.

Sammie has her own stories but they weren’t quite as gross so we were a little more prepared for them.

So as you can see, we had already dealt with the two big gross factors, poop and vomit, what could be worse, right?

Ya, boy were we wrong!

It was a great morning. Everything was going so smoothly and I was getting a lot done. The sun was shining the blinds were open to let it in, the girls were behaving and mommy was in a good mood. Joel came up for a minute to get something and happened to peak his head in the bedroom where Lucy was playing in the pack and play. I don’t know if he heard something or smelled something, but boy am I glad he came up when he did.

Lucy had been dealing with a diaper rash so before I laid her down for a nap I took her diaper off and put some towels down so she could have some air time on her bottom. She woke up after about 45 minutes and the towels were still dry. I had just been into check on her not two minutes before Joel went in and everything was fine, she was playing nicely.

Then I hear “honey come here now” in a very serious tone. Immediately I knew something was wrong and it probably had to do with poo. I went in and saw Joel holding Lucy. I looked in the pack and play and sure enough there was poo but it wasn’t that bad. So said “Oh, ok” and was about to start grabbing the towel and pulling it out when Joel say “No, Look at Lucy.” And then I saw it. It was all.over.her.mouth. It was all over her hands. It was under her nails. And worst of all… it was in her mouth, between her teeth even, not just a little, but a lot.

I will openly admit that I dry heaved many times. I have dealt with a LOT of gross things; smelly, icky, things in my day, but this one about did me in. I kept it together though. I ran and got a wet washcloth and went to work scooping, yes scooping, out the poop from her mouth. Then I got her some water to try and flush the rest out. Next was the bath to clean the rest of her and finally I nursed her to help flush what she did swallow out of her system.

And here I am today, a survivor, a little worse for the wear (my stomach still gets a little queasy just writing this), but stronger for it.

What did I learn through all this? Well, it’s not going to kill your kid if they eat their own poop. According to all the forums I read, if they are going to do it, theirs is the best, since it has already been through their own system and they aren’t introducing something someone else or something else may have. It’s best to keep them well hydrated so that their body can flush it out as soon as possible. It is perfectly normal for them to get diarrhea. If they get a fever you should take them to the doctor.

Here is a very funny story from another mom, with a similar experience. I found this while nursing Lucy after the incident and searching for answers. After reading this both Joel and I have decided to start using the term “Code Red” in these situations so we can give the other a heads up as to the severity of what they are heading into.

I am linking this to Encourage One Another.

Libby, I am just having a gay old time laughing right along with you!! this is great to bring back some of our memories… very funny, and yes, pretty gross!! You beautiful daughter will be mortified one day that you told the W.O.R.L.D!!!!! Lol
I am so glad to find you!! Your blog is a treasure!

Jacqueline- Thank you so much for stopping by! What a pleasure to have you visit my little blog! I’m glad you are having a good laugh. God gave us laughter for a reason, and raising children is a great outlet for it. There are somethings with raising children that we should take very seriously, but the everyday things should be enjoyed and laughed about instead of being seen as failures when they don’t turn out the way we envisioned them. I’m sure you know that quite well! Thank you for all your encouragement to us young mommas.