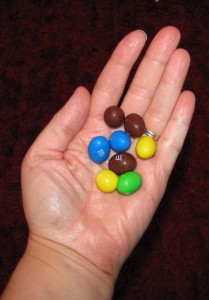 God is in the little things. And I mean itsy bitsy, tiny things.

But first, the confession. I am an equal chewer. Not with everything, but with a lot of things. What is an equal chewer you ask? Well, it someone who “needs” to chew equally on both sides of the mouth. Or have equal numbers of an item on either side of the mouth like raisins or peanuts. If there is only three left some will only eat two and throw the third away, while others, like me, will bit the third in half and divide it between the two sides.

Some call this Obsessive compulsive; I think it just means I like things symmetrical!

And now on to the God in the little things part. Last week my brother was over for a visit. While we were sitting chatting I opened a snack sized bag of peanut M & M’s and dumped them into my hand. I immediately started grabbing the first two of the same color (did I mention I also have to eat like colors. No mixing of the colors her people!). I ate the first two and looked down at my hand to find the next two when I realized that all six of the remaining M & M’s had matches AND were sitting next to their color partner! I had not rearranged them people. They dumped out of the bag that way. I stopped the conversation dead in its tracks and exclaimed to my brother “Do you see this!” He then admitted that he had noticed earlier but wasn’t going to say anything. Each pair was a different color, four pairs in total. Seriously, it made my afternoon! I know I am ridiculous, but I am who I am so take it or leave it!

Do you have a fun obsession you are willing to admit to us? Surely I can’t be the ONLY one!