Home » Blog » Being Green » Canning and Other Such Things

Canning and Other Such Things 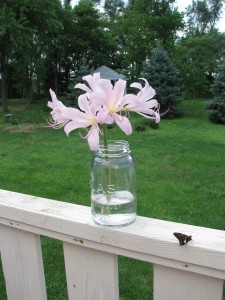 I want so badly to start canning. I had big plans this year of all the different things I was going to can. But as I shared here, the garden didn’t go as planned. I do plan to do some canning this fall. I make tons of apple sauce in the fall and it gets consumed within the first few months. Usually I freeze it but this year I want to try canning some of it too. I need to at least double what I bought last year (which was three bushels!) so that I have enough for the whole year. Plus I want to make some apple butter and can that as well as some apple pie filling. Maybe some tomatoes if I happen to find someone with an over abundance of tomatoes that they’re trying to off load. We’ll see.

I’ve been looking for canning jars at garage sales but the only ones I’ve found were antiques that A. they wanted $2 a piece for (which is a very fare price for antique canning jars but when you can buy them new in the store for under $1 a jar it’s not such a good price) and B. you don’t actually want to can with them, they really are for show. Enter my aunt J. She had been following my sorry garden attempts via Facebook and my blog and thought I might be interested in some of the canning jars and paraphernalia that she was no longer using. Oh boy was I!

Yesterday I loaded up the girls and headed over to her house. She had three full shelves of canning supplies and I could have whatever I wanted. I got jars that were my grandmothers and jars that were my great grandmothers. I haven’t even taken the time to count how many I got, but got quite a few in all shapes and sizes. She also gave me her small and large pressure cookers as well as the large pot for warm bathes (those that are high acidity and don’t need to be pressure cooked). What a huge blessing! Just the jars alone would have easily been $50 new from the store and I won’t even get into how much it would have cost me for the pots.

Growing up, aunt J. was the aunt who made her own bread, grew her own garden and canned what she harvested to feed her six kids (four of which were very hungry boys) and knew practically every plant and it’s use in the surrounding forest. Visiting her house was a blast regardless of the fact that I was always out numbered 6 to 1 (her 4 oldest boys and my 2 brothers). I aspire to be as self sufficient as she is!

I left that day with the open offer that if I needed more jars I knew where they were and I was welcome to them. And since I don’ think I even took half of them there are plenty more should I actually get good at this gardening and canning thing and find myself running out. Though I probably won’t get very much canned this year, I am excited to practice this year and hopefully be a pro by next year!